The 50th Anniversary of Alaska Statehood also marked the 50th Anniversary of the Alaska Court System. The Alaska Bar Association and the Alaska Court System co-sponsored the Alaska Legal History Series in honor of this milestone, which featured presentations by prominent lawyers and jurists on the early days of our justice system. The presentations were filmed and are available for viewing by contacting Deborah O'Regan, Executive Director, Alaska Bar Association, at 272-7469 or oregand@alaskabar.org.

The 50th Anniversary of Alaska Statehood also marked the 50th Anniversary of the Alaska Court System. The poster exhibit The Alaska Court System: Celebrating 50 Years commemorates the occasion with a photo retrospective highlighting key people and events in the court's history, from Statehood to the present day. Teachers are welcome to print it for use in their classrooms.

Accompanying the exhibit is a Quiz that is drawn from information on the posters and designed for use in classrooms and at participating courthouses.

From 2003-2008, the Alaska Court System sponsored the Alaska Teaching Justice Network, a coalition of educators, lawyers, judges, youth leaders, legislators, agency officials and others dedicated to advancing law-related education [LRE] in our state, which was supported by Youth for Justice, a program to promote law-related education funded by the Office of Juvenile Justice and Delinquency Prevention, U.S. Department of Justice.

The Task Force presented its report to the legislature in February 2008.

OPEN COURT is a judicial outreach program initiated by the Alaska Court System in February 2007 that brought former Chief Justice Dana Fabe and former Administrative Director Stephanie Cole together with members of the justice community and the public for discussion and problem-solving on specific topics of mutual concern. OPEN COURT sessions took place in most of the fifteen superior court locations in the state between 2007 and 2009. Each local court was asked to select the focus of OPEN COURT in their community.

The goal of OPEN COURT was two-fold. First, the program sought to identify practical solutions to the challenges facing the justice system by creating a forum for discussion, identification of best practices, and consensus-building among the decision-makers involved. Second, the program aimed to foster greater public understanding of our justice system and the role of courts in addressing community problems. To address these goals, the program format was divided into two parts: a work session for justice professionals and policymakers followed by a reception for the public at large.

OPEN COURT forums resulted in practical recommendations for timely action by the court system or legal community. For example, the main recommendation from the Juneau session was to establish a mental health court on a trial basis, and plans for a Juneau mental health court were shortly underway. In Ketchikan, the community decided to develop an educational team on the risks of juvenile substance abuse, drawn from the courts, the legal community, and public safety officials. The team plans to visit schools and youth organizations throughout the region. Sitka OPEN COURT participants identified the need for greater information and training about unbundled legal services as one of the best ways to address the rise in self-representation, and as a result the Alaska Bar Association sponsored a workshop on the issue during the fall of 2007. All OPEN COURT events promised comparable outcomes for improving the administration of justice. 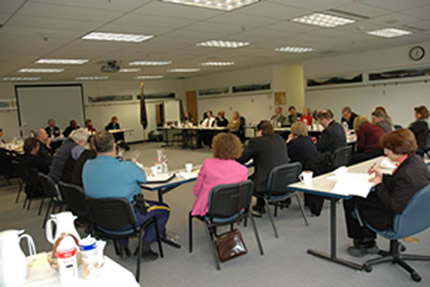 
Success Inside and Out Program

The Success Inside and Out program was founded by Alaska Supreme Court Justice Dana Fabe to help incarcerated women prepare for the transition to life outside prison. Since 2006, the program has sponsored annual conferences at Hiland Mountain Correctional Center near Anchorage to provide information and support to women inmates prior to their release from prison, with the goal of improving their chances of success in the community.  Since 2008, the program has also been presented annually at Lemon Creek Correctional Center in Juneau.  At both locations, volunteer professionals offer workshops on topics that range from securing housing and employment to managing finances and maintaining healthy lifestyles.  Motivational speakers, music, and ever-popular luncheon fashion shows round out the conference activities.  Co-sponsors include the Alaska Court System, the Alaska Bar Foundation, and the National Association of Women Judges.